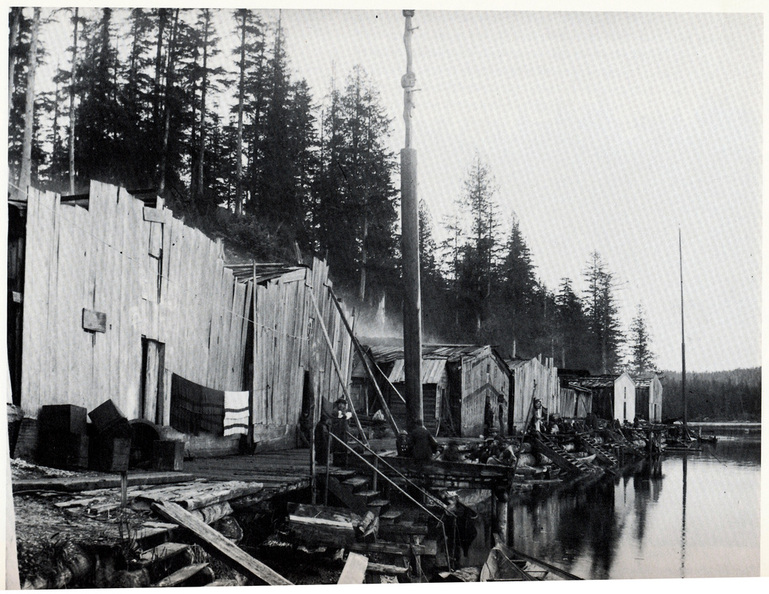 The immense communal houses of the Northwest Coast kept the damp chill of a temperate rainforest at bay, but also provided ample space for dramatic & religious performance, work, storage, and hosting huge potlatches and feasts. Large villages might contain 80 houses, each holding as many as 100 residents. The indigenous people of the Pacific Northwest constructed their plank homes from red cedar trees (Thuja plicata), with rare use of yellow cedar, spruce or hemlock up North.  Houses were often 40-60 feet  square.  The primary frame of plank houses consisted of cedar logs: usually 8 posts peg-joined to 4-6 roof beams.  A lighter framework of poles (approx. 3 inches in diameter) was tied with cedar-bark to the wall posts & rafter beams.  The house was then covered in 4 in thick planks of cedar that could be harvested from live trees via wedging.  While wall planks were tied, or slotted between poles, roof shingle planks were often simply weighed down with logs & rocks, facilitating removal and reuse in summer clan harvesting camp locations.  The house frames were left intact until the next season when the people returned and reattached their traveling planks and reconstructed their home. Wall planks could be aligned vertically (Kwakwaka’wakw/ Nuxalk/ Tlingit/ Haida / Tsimshian) or horizontally (Nuu-Chah-Nulth). 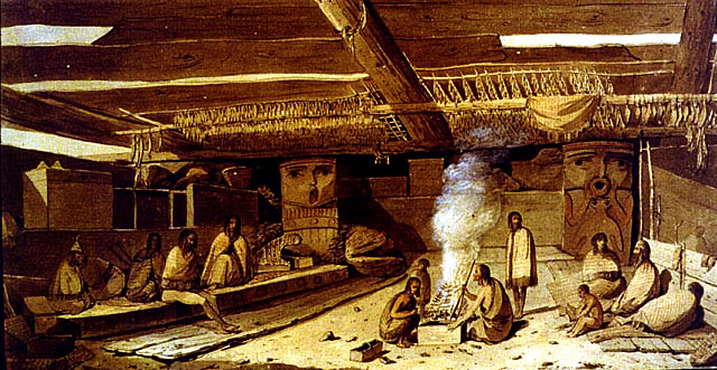 "Interior of Habitation at Nootka Sound" John Webber (British), April 1778
The interior of a NW Coast plank house often contained a central fire pit, raised platforms around the perimeter of the house (for sleeping,sitting, storage), a separate walled chamber against the back wall for the chief’s family, a smoke-hole, and possibly woven or plank dividers to delineate spaces.  Southern & central houses usually had a packed-earth floor, while the houses of the Haida, Tlingit, & Tsimshian in the colder north often had planked wooden floors. 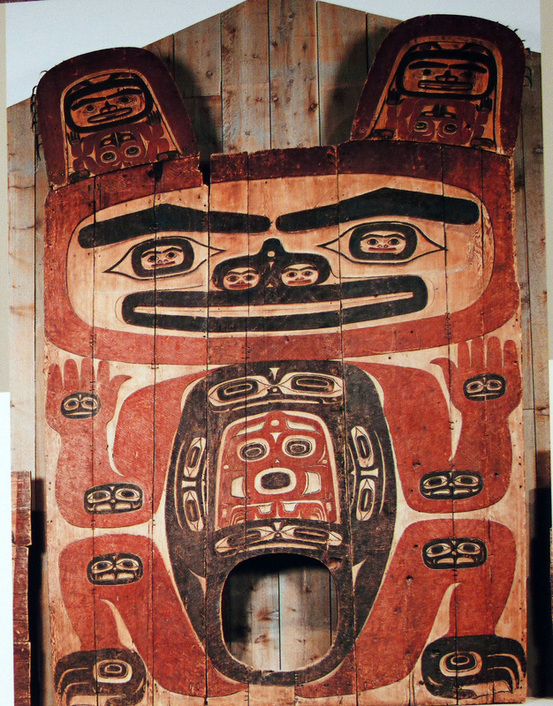 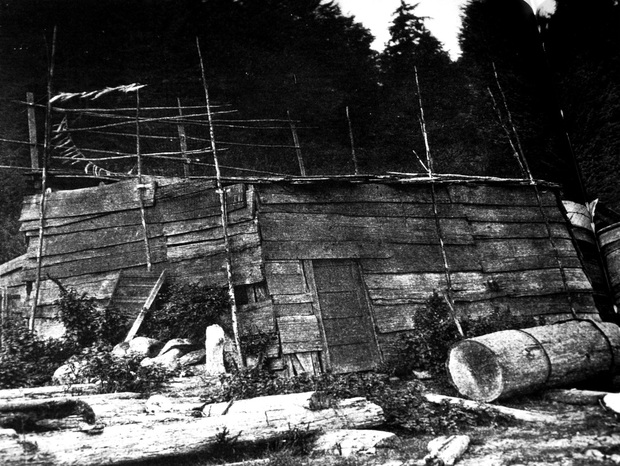 The southernmost peoples  (Makah, Tillamook, Chinook)  lived in large rows of shed-roofed townhouses (i.e. built touching in long rows).   The chief lived in the central house (up to 90 feet wide itself), and the adjoining clan’s houses might extend hundreds of feet in each direction.  They might be 40-50 feet deep.  The single plane pitched roofs were usually  20 feet tall in the front, and 6-10 feet in the back.  Two doors were built:  in the front and rear corners.  Southern houses had quite sparse is any clan/religious architectural ornamentation (eg. Anthropomorphic or wolf totemic carvings on posts or doors).
Quinault and Salish houses were gabled like the central examples. 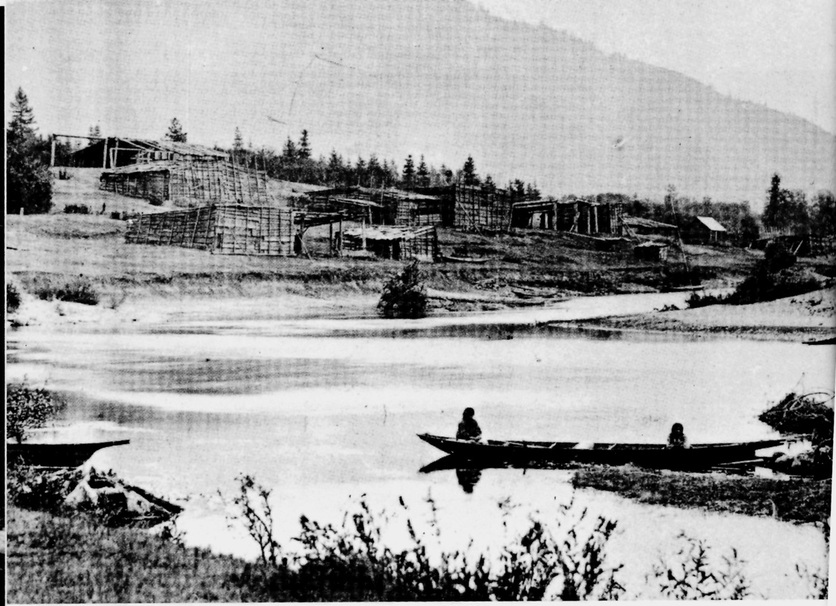 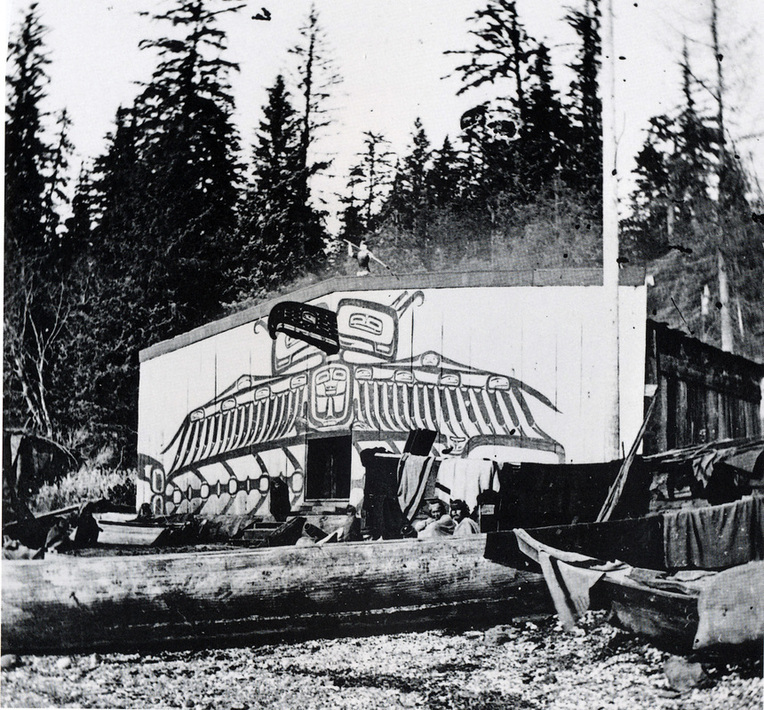 Kwakwaka'wakw and Tsimshian winter houses were not considered the property of their inhabitants.  Houses were owned by clan lineages (numema in Kwakiutl).  It was the job of every clan member to guard the house/”spiritual associate of the chief” and add to its wealth : display of crests of supernatural beings. (Social Organization) 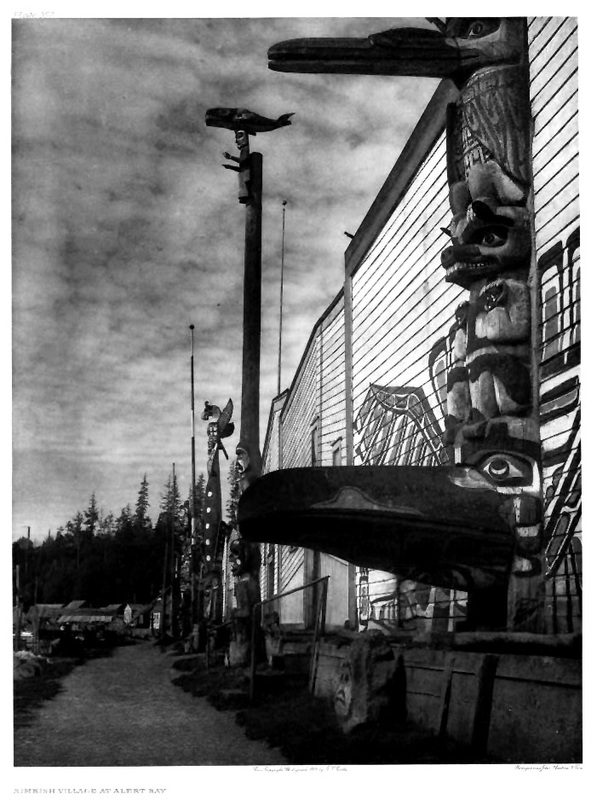 Plank houses in the northern reaches of the Northwest Coast tended to be smaller, but more finely joined than their southern incarnations.  The freezing climate of the north necessitated smaller houses (average 35 ft square) with wooden floors and more tightly-fitted planks for heat-retention.   Posts and beams were joined with tight mortise & tenon joints, and the planks were usually slid into a slotted base of the exterior walls.  Most northern houses employed the same framing design as the central houses.   In the north, the Haida were famous for their sculptural embellishments on posts and beams, the Tsimshian for their elaborate painted facades, and Tlingit for their interior screen decorations.

North American carpentry reached it's apex in the houses of the Haida.  Their houses boasted wood-planked cellars for storage and to escape the fiercest weather.  They also developed a late period 6-beam roofing frame on Haida Gwaii around 1800.  This gothic style may have its inspiration in the metal tools and focus on conspicuous display of material wealth that arrived with American & European traders.  Monumental totem-pole building also developed during this era of trade and better woodworking tools. 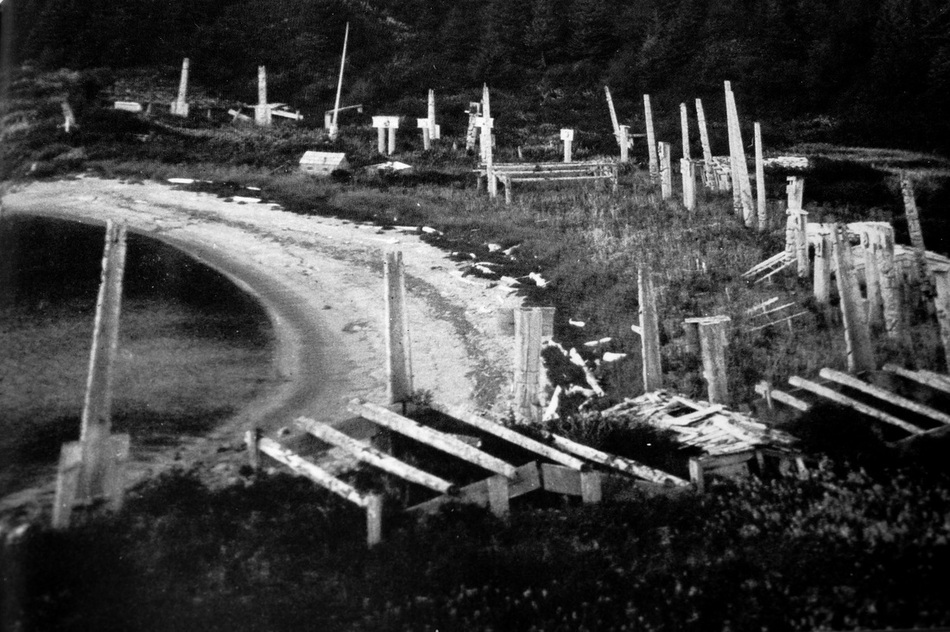 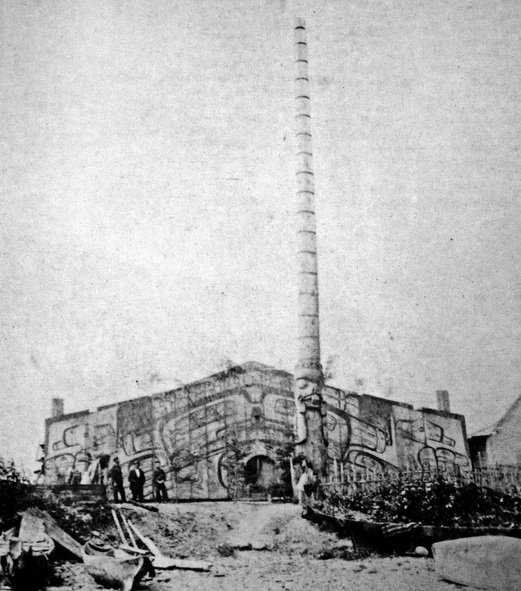 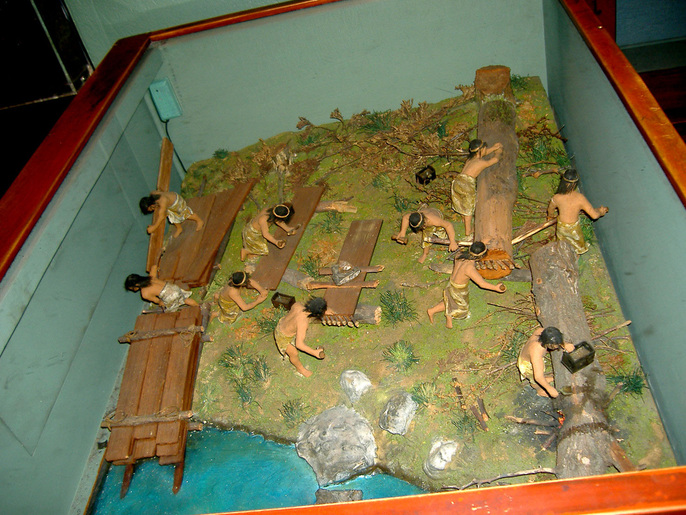 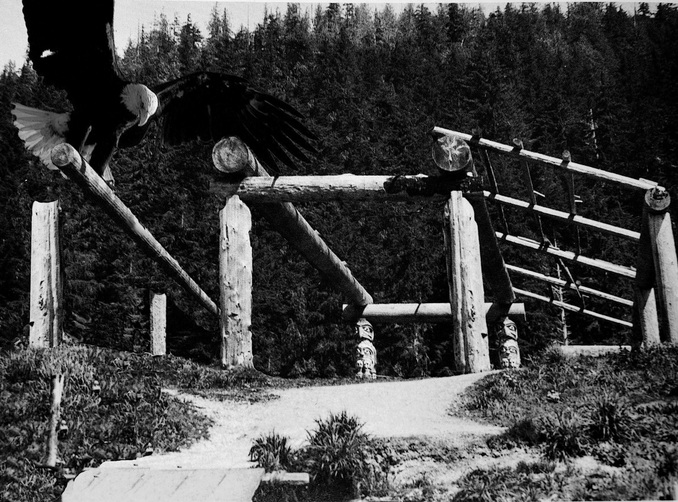 Kolus easily lifts a roof beam into place for the Kwakwaka'wakw. 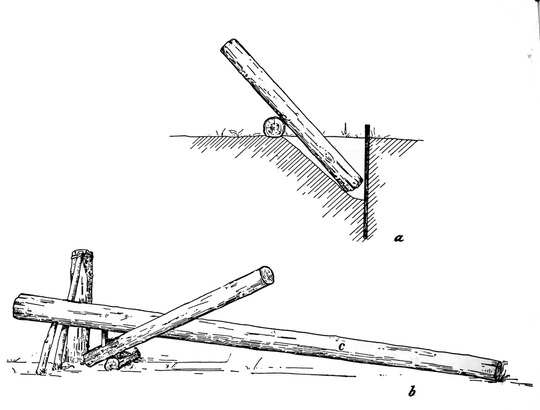 Boas - Kwakiutl Ethnography p.33
Boas  (Kwakiutl Ethnography p.33) states that the heavy log posts were laid horizontally near a post-hole dug as a declining  ramp at the front, and a plank-reinforced vertical side on the other (see diagram). The post could be erected using ropes and spars.  To lift the heavy beams (approx. 150 lbs/foot:  7,500 lbs for a 50 foot beam), the architects employed a strong pole as an inclined plane.  Having tied one end of the “ramp” pole to the top of a post, the builders could carefully lever one end of the beam at a time up the ramp.  The thick  lever was positioned at the bottom of the post, lifting straight up, as the beam pivoted to move up the ramp (see graphic).   Temporary supports of increasing height, hold the beam in place while the lever is reset. 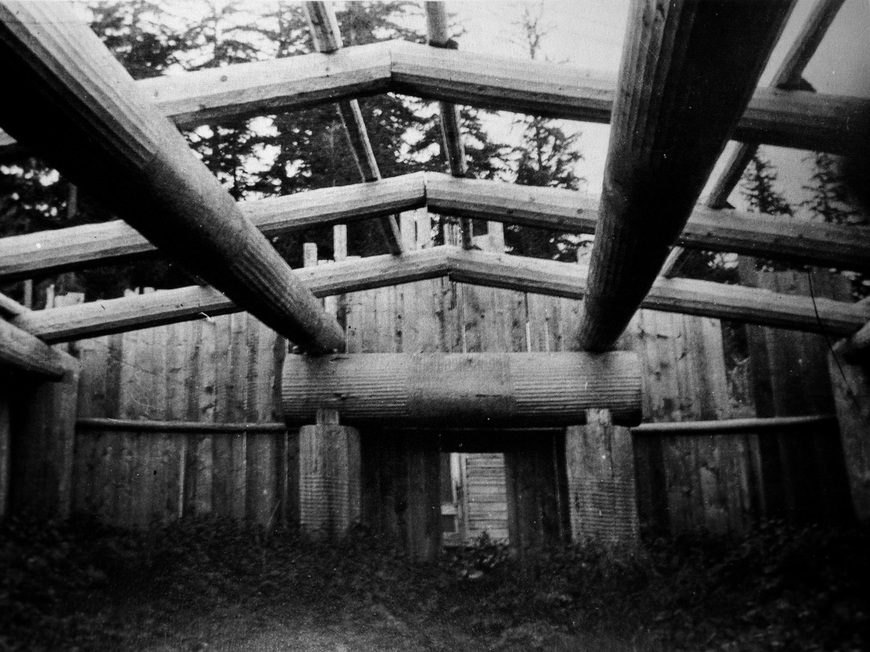 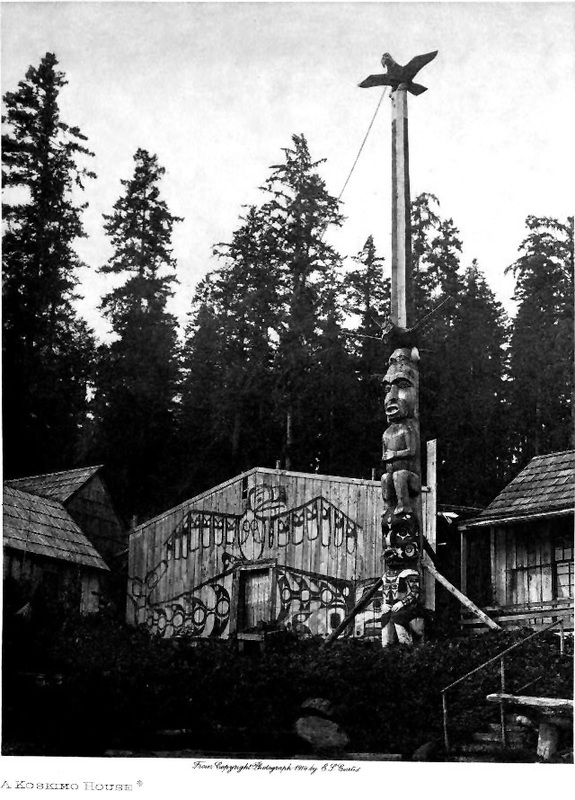 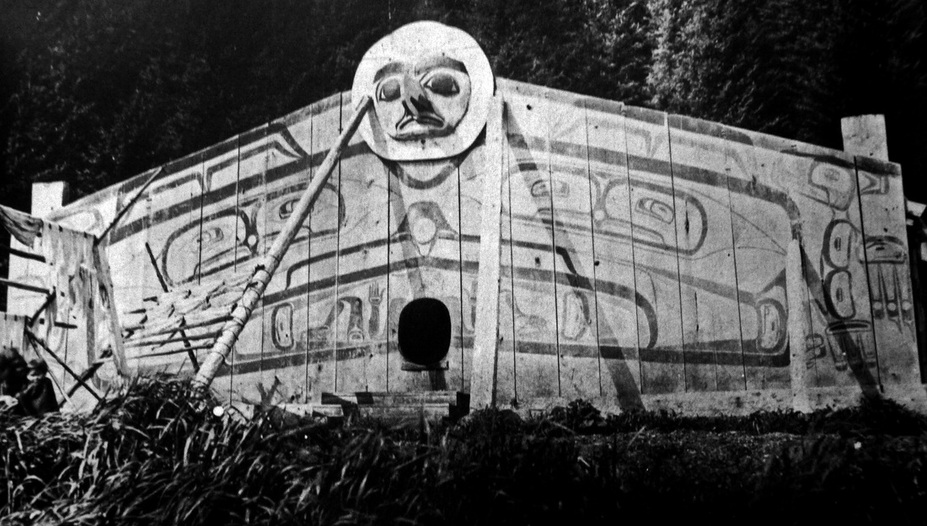 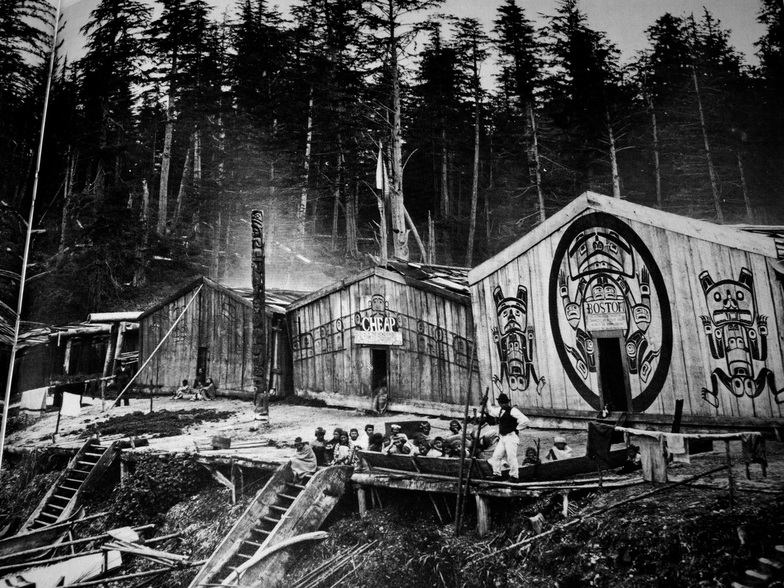 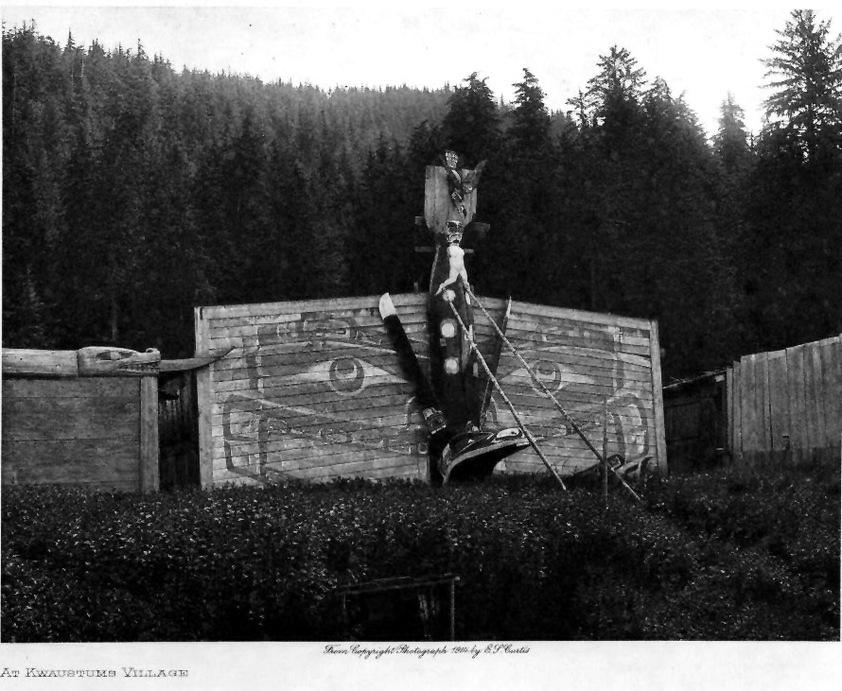 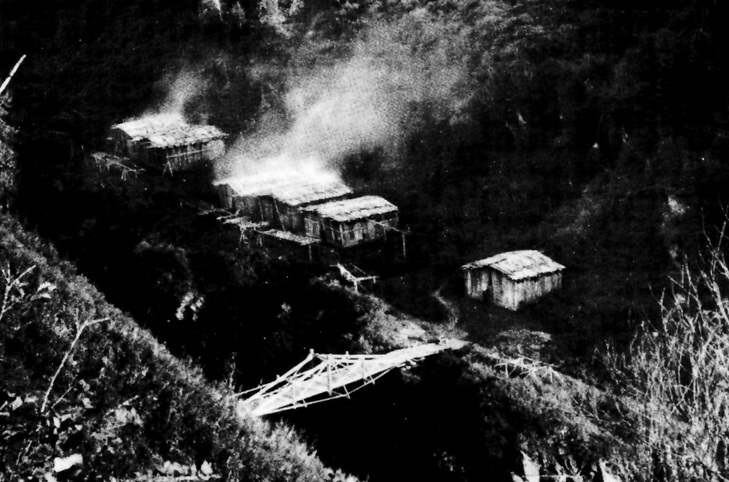 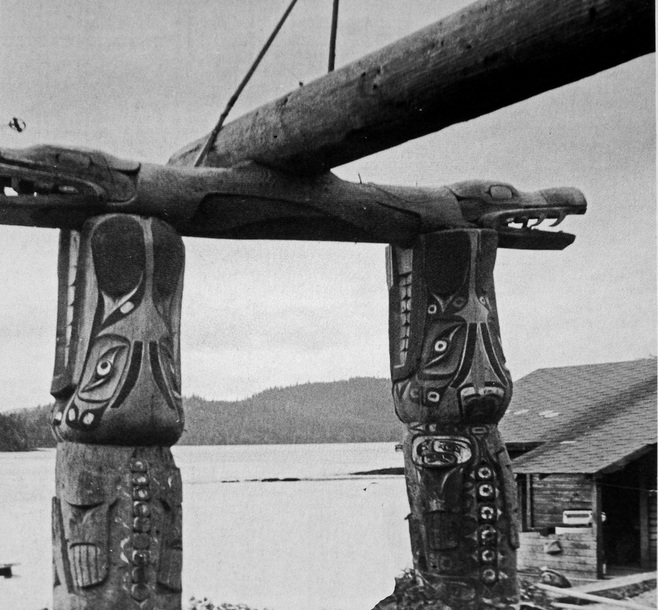