Central to the Hamatsa ceremonies is the story of some brothers who got lost on a hunting trip and found a strange house with red smoke emanating from its roof.  When they visited the house they found its owner gone, but one of the house posts was a living woman with her legs rooted into the floor, and she warned them about the frightful owner of the house, who was named Baxbaxwalanuksiwe, a man-eating giant with terrible man-eating birds for his companions :

One version of the story describes the giant with mouths all over his body. According to another version, the brothers lured Baxbaxwalanuksiwe into a pit and threw hot stones on top of him until he died. With the death of the giant, the men gained mystical power and supernatural treasures from him. These included wooden whistles, a bear mask, bird masks, costumes, and a Hamatsa pole, all used in later actual rituals. Variations of the myth abound within the Kwakwaka'wakw culture, but this man-eating giant was aided by an old hag, Qominoqa (possibly Dzunukwa), who gathered bodies for him to consume.
-Wikipedia 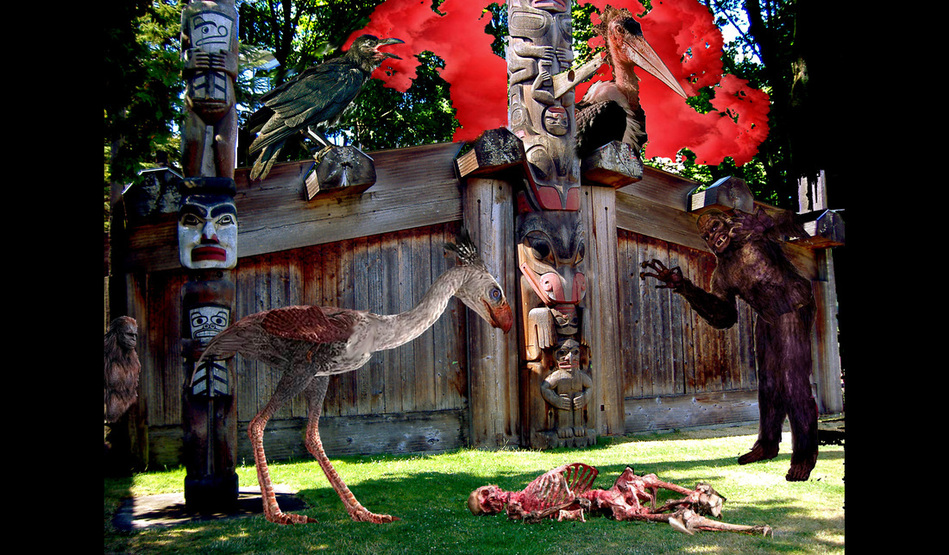 Summary of the Story of Baxbaxwalanuksiwe

NaWaka'Wa was the chief of our family long ago.  He had four sons, and one day as the brothers were packing their things in order to go into the mountains to hunt mountain-goats, the old chief gave them some advice: NaWaka'Wak warned them of a land where the smoke was like the colors of the rainbow, where the brown smoke was for the bear and the white was for the whale, and so on with all the colors and clans, and the red smoke was the color of the cannibals.  Then NaWaka'Wa gave them a smooth pebble, an alder-wood comb, some fish oil, and some mountain-goat wool.  And he said, "If the cannibals come after you, you must throw them these things, one at a time."

So the young men went into the mountains on their way. And they soon came to a land where there were many houses, and the smoke from each house was of a different color, just as their father had told them.  And they said, "Look,  this is the land of which Father warned us.  Let us go see."  And they went into the
first house, which had red smoke coming from the smoke-hole.  Here there was a very large woman and her child.  Now the youngest of the brothers had scratched himself on some brambles, and was bleeding somewhat, and the woman said, "scrape up the blood with this stick."  After the youth did so, she gave the stick to her child, who licked the drops of blood from it.  The brothers then began to suspect that the woman was a cannibal, since her child craved human blood.

So they pretended to engage in an archery contest, and the youngest shot an arrow out through the doorway; then the oldest shot another, and the two of them ran out to find their arrows, and the other two followed in the confusion, and they all ran off.   Then the woman went and called for her husband, and he came and asked
what had happened, and she said the young men were searching for their arrows.  Bakw'bakwalanukshway the cannibal chief, who was a monstrous giant as well as a cannibal, realized that the brothers were escaping, and he set out after them.

Soon the brothers heard him whistling and snorting and gnashing his teeth behind them, and they knew he was about to catch them.  So the eldest
brother threw down the smooth pebble, and it became a huge mountain, with sides so smooth that the cannibal couldn't climb it, for a while.  But he soon made his way around it, and once  more the brothers heard him whistling and panting and grinding his teeth behind.

Then the next brother threw down the comb, and it became a forest of alder trees so dense that the cannibal chief could not get through, for quite some time.   But soon enough the brothers heard him snuffling and grating his teeth behind them, and the next brother threw down the vial of fish oil, which became a vast lake, such that the cannibal could not get past it, for a very long time.   But after a bit the brothers heard him again, hooting and whooping, and gnashing and grating and grinding his teeth, and the youngest brother threw down the mountain-goat wool, which became a dense fog, through which the giant could scarcely find his way.

But the fog did slow him down long enough that the brothers were able to reach the foothills of the mountains, and their father's house. Then they ran calling to him that the cannibal chief was coming, and chief NeWaka'wa tied a cedar rope around the house, and he and his sons hid within.  Then the cannibal chief was unable to get at them, for a time.

But he began to come in through the smoke-hole, so Chief NeWaka'Wa called to him, saying "Brother, be at peace, for if you wish to devour my sons. you have no need to hurry, but you may return tomorrow with your wife and child and devour them then at your convenience, for in truth they are worthless boys and of very little use to me"  So the cannibal chief went away, and Chief NeWaka'Wa and his sons made preparation for their return; they carved a large settee in the form of the Sisiutl or giant two-headed sea monster, (some of the poles of Walkius have the Sisiutl, but this one does not, it was on the settee instead) and they killed four dogs and pulled their entrails out (the dog or Wolf appears on the pole, and also is present as a matter of right, for the sister of Walkius was a Wolf; and the Bear appears because Wakius married a woman of the Bear clan.)  And they took many of the big rocks such as are heated for cooking, and they put them in the fire.

The brothers then lay down as if they had been killed and their intestines torn out, and they pretended to be dead.   When the cannibal  chief and his wife and child appeared, Chief NaWaka'Wa said to them, "Here is your food, but first you must sit, for it is our custom before we eat to tell a story."  Then the cannibal chief
and his wife and child sat down, and Chief NeWaka'Wa told them a long story about his family and the origin of certain crests and privileges...much like this present story.  And the chief shook his talking stick, which was carved in the form of the pole with the crests on it, and there were pebbles inside the talking stick which made a soothing sound, and soon the cannibals fell asleep.

Then the four brothers leaped up and pulled the settee apart, so that the cannibal chief and his family fell into the pit; and the heated rocks and the coals were thrown in after them, so that they were entirely burned up and their ashes floated out through the smoke-hole.  Chief NaWaka'Wa cursed the ashes, saying "You will become mosquitos and biting insects like the horsefly, and will suck the blood of men."   Then Chief NaWaka'Wa sent his sons to the village of the cannibal chief, to see if there was anything there that might be of use.  And the brothers went there and found, in addition to a great amount of mountain-goat meat, the great mask of the Hokw-Hokw, the giant bird that cracks men's skulls to eat their brains, who is sometimes called the supernatural mosquito; and the mask of the Raven.  And there they are on the pole, with the other crests and even Bakw'bakwalanukshway himself.   And thus the brothers returned with the cannibal dance, as was their right, for they had defeated and utterly destroyed the people to whom it had belonged.  The dance is the story of how the cannibals were overcome by our people.


*(summarized from the usual sources by Steve Akerman)